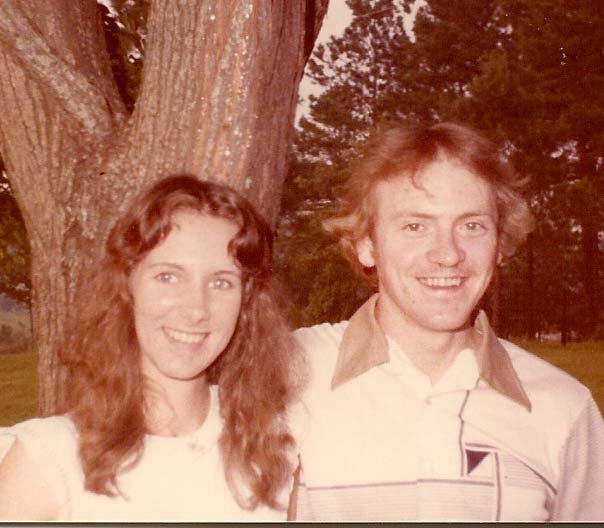 Well, it all started like this. I had a job at the roller rink in the same town where I went to college. I had finished my first year, and had decided I was there for all the wrong reasons, and would not return for the fall quarter. I commuted 30 miles one way, and as long as I was in classes, I simply stayed in town to go to my job on Friday and Saturday nights. When classes were over for me for the summer, I didn’t make enough to even pay for my gas to commute just to work at the rink, so my parents had told me I would have to quit my job for the summer.

But there was this guy who had started coming to the rink….. I memorized his skate size when he had come a few times. I saved the best pair of his size for him; and waited. We were busy that night, and the line had dwindled. I thought he wasn’t coming. Then there he was. I smiled up at him, and plopped his skates on the counter. He smiled back, and plopped his brand new skates on the counter. He had bought his own! To me that meant he would be coming often.

I wanted to skate with him, just to skate. I really only wanted a friend to skate with, unless it turned into more. There were three “couple skate” songs each night. Two of those had been played, and he hadn’t asked me to skate. The night was almost over when my boss asked me what was wrong. I told him. He said, “The next song will be ladies’ choice, and you go and ask him.” Well, I couldn’t do that! That just wasn’t lady like (That’s what we southern ladies are taught by our Mamas). But what if I never got to skate with him and he never got to come back for some reason? My boss threatened to take my hand and roll me over to him and tell him I wanted to ask him to skate. Well, I REALLY couldn’t let him do that!  (At some point in the next year my point of view of asking the guy first changed. But then that’s a story for another blog post…..)

So I coasted to him, and asked if he wanted to skate. He had just taken a couple of sips from the 7up drink he’d just bought. He looked at me, then at his drink, then at me again. He dropped it into the trash, and reached for my hand. As he turned to skate backwards and reached for my other hand, my heart did a little flip. We swapped names; his name being Roy, mine being Cindy. We became friends over the next few weekends, till finally he asked me out for the first time; for a real date.

I did quit my job, and soon we fell into a comfortable pattern. On Friday nights, we went somewhere to eat and then to a movie if there was something decent playing, or hung out with the family. Saturdays we got something to eat and went skating in another nearby town with a bigger rink. That next year is one I’ll never forget; getting to know my best friend; the one I love who became my husband, and is a very special gift from God.

On June 7, 1980, Roy and I became husband and wife, surrounded by family and friends almost exactly one year from our first date. It’s been 33 years, as of our wedding anniversary this year, and I’m so glad he came to the skating rink where I worked that night, and that he skated with me that night for ladies’ choice. I look forward to spending many more years together through the phases of life.

The picture posted above was taken during the summer of the year we dated, a long time ago. I’ll post a wedding photo with the post I hinted at above about “asking the guy first.”

Be very blessed, my friends.

4 thoughts on “HIS NAME IS ROY”